Here with the famous Debbie Rice who has many world titles While in the Air Force, I discovered how being in shape makes everything else be harmonious. Being strong and fit is Exhilarating.

Years later I joined a local skating group and was hooked to inline Speed Skating.  I developed leg muscles which helped me win races and maintain a healthy weight.  In 2001 I left the indoor competitive skating circuit but still skated the outdoor fun events. I pursued teaching individual clients that are determined to make a life change and make skating one of  their habits. ( I again began indoor competition from 2011-2016)

I love that I make a positive change in people’s lives.  It is so much fun for me to see a person’s face when they learn to skate!  They have acquired a sport they can do forever; alone or with others.

my primary reasons to skate is for fun & EASYFitness!

Over 40 feeling out of shape?  Skate and be younger!

I am not kidding. I have people over 60 learning to skate, and they get so much stamina from it.

call 941-822-3104llerblade teacher
It is imperative to wear a helmet, wrist, elbow and knee protection.  After skaters get proficient at skating, they no longer use elbow & knee guards for better aerodynamics. They wear a helmet and wrist guards.  All my years skating I have only seen one person get hurt where they broke a collarbone. That person hit a tree branch and did not have wrist guards.  Wrist guards help a lot by preventing one from breaking wrists and making one able to slide instead of slamming down on hands, arms, bones.

Speed skaters do not have a break on their skates. I recommend that once you learn to skate well, that the break be removed for better maneuverability.  In the city, where there is a lot of stop and go activity, you may want a break to not wear out your wheels.

It’s also very important to carry water.  Dehydration is not fun and even when its cloudy, one will sweat without feeling it, as water evaporates as you skate.

WEAR SUNBLOCK OR LONG SLEEVES.  I DO!!!! 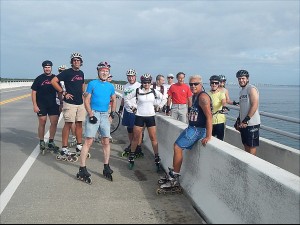